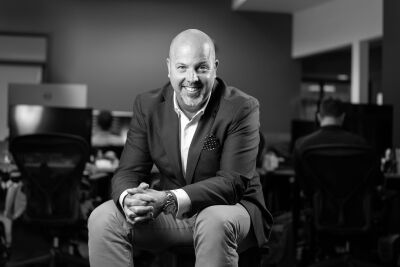 As co-founder and CEO of Cambridge Mobile Telematics (CMT), Bill is focused on making the world’s roads and drivers safer. Along with co-founders Hari Balakrishnan and Sam Madden, Bill has helped build CMT into the world’s leading mobile telematics and analytics provider. Since CMT’s inception in 2010, its award-winning DriveWell platform has grown to be used by more than 35 customers across 25+ countries, benefiting millions of drivers globally. In December 2018, CMT announced a $500M investment from the SoftBank Vision Fund to accelerate the adoption and growth of its existing platform and innovations. According to the Boston Globe, this is one of the largest tech investments in Massachusetts history.

CMT’s road to global success has been paved by its people. Bill encourages employees at the company to communicate fearlessly but respectfully, to be compassionate and considerate of others, and to be intensely inclusive. This is Bill’s influence. His challenging upbringing – the loss of a parent at a young age, financial struggle, the tragic death of his son, Luke – has shaped who he is and what he values.

The company and its associated platforms have the ability to actually save lives, so Bill is invested in the people who can make that happen. By introducing user-focused technology and optimizing engagement, CMT is able to lower distraction by 35% and reduce at-risk speeding and hard braking by 20% within the first month of adoption, enacting real change.

This is not the only way in which Bill strives to make the world a safer place. In memory of his son, who was tragically lost at birth due to medical error, Bill and his wife, Suzanne, created the Luke Vincent Powers Foundation. As a strong leader, Bill often faces challenges with a positive outlook while empowering the people around him to think and act like leaders themselves. As such, the foundation’s mission is to break down professional barriers in the healthcare industry in order to end preventable medical errors, so that no family has to endure a loss like theirs.

The road Bill has taken to become CEO of a company that led one of the largest fundraising rounds in Boston history is both bold and unique. Prior to CMT, he played a vital role in building and managing other successful organizations, like Swoop and Traffic.com. As Executive Vice President of Sales at Traffic.com, his efforts helped shape the growth of the organization that led to the company’s IPO, its acquisition by NAVTEQ, and subsequent sale to Nokia.

CMT embodies Bill’s integrity, kindness, and perseverance. His desire to face hardship by becoming an agent of change is what fuels the company’s mantra: Safer Drivers. Safer Roads. CMT uses artificial intelligence, mobile sensing and IoT, and behavioral science to encourage better driving. One of the most influential ways to make use of the company’s data is to create feedback loops that engage drivers at their core, truly challenging them to rise to the occasion and become one less risky driver. It is in this way that CMT is different from any other tech product; the company has an innate understanding of humans. And it is in this way that CMT – and Bill – continue to change the world.
Featured in
Changing the nature of insurance risk, Wednesday May 27, 2020 1:50 p.m. - 2:20 p.m.