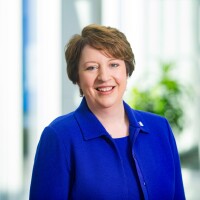 Shelley Brazeau Temple serves as President of Nationwide P&C Personal Lines. In this role, Shelley is responsible for all aspects of the Personal Lines Profit and Loss (P&L) segment including product, underwriting, sales and distribution, claims and service.

Other leadership positions she has held are:

Shelley began her career at Nationwide as a Claims associate 27 years ago. Her increased responsibilities in leadership positions throughout the years also led her to work with internal audits, product and agency sales.
Shelley holds a bachelor’s degree from Bowling Green State University and the Chartered Property and Casualty Underwriting (CPCU) designation. She has served on several non-profit boards, including Ronald McDonald Children's Charities and the American Lung Association of the Midland States with participation in development, audit/finance and executive committees.